We finally managed to hold an AGM on 24th November 2021, having had to postpone the meeting for some considerable time and with a last-minute change of venue.

Our usual meeting place, Bebington Civic Centre, was not available but thankfully we were able to book Mayer Hall in Bebington, who were able to accommodate us.

The minutes of the previous meeting were approved, and the reports of the Chairman and Treasurer were received. All the Trustees were re-elected and a proposal to move the date of future AGMs was approved.

The Hon Chairman, Steve Harris, was presented with a gift in appreciation of his many years of devotion and work on behalf of the Trust.

After the refreshment break, Steve Harris presented an enlightening overview of the work that the Trust had been able to achieve during the restrictions that Covid had imposed, accompanied by photographs and short videos. 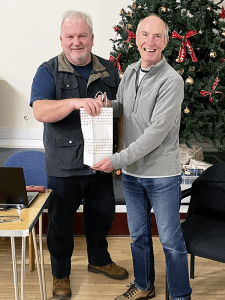 The data supplied to the British Trust for Ornithology by Wirral Barn Owl Trust showed a sharp decline in the number of active nest sites and chicks (16) raised during 2021, at least half of those recorded the previous year. It was also apparent that all the breeding occurred in the South of the Wirral with none in the North, including our resident live stream female Barn Owl who rejected any male advances.

Despite the hard work carried out by the fieldwork team, there is still much to be done, with an increasing backlog of repairs to and replacement of nest boxes.

If you are able and would like to become more involved with the Trust’s activities, we would be delighted to hear from you, you can contact us through the website.

Thank you for your continued support.

The meeting will take place at 7:30 pm on Wednesday 24th November 2021 in Meyer Hall, The Village, Bebington, Wirral CH63 7PL (next to the Rose & Crown & opposite the Civic Centre). Light refreshments will be available.

All subscribing members are eligible to attend, and we look forward to being able to meet again and discuss the Wirral Barn Owl population.

The Trustees of Wirral Barn Owl Trust are pleased to announce that we are now able to hold an AGM, as required by our Constitution.

The meeting will take place at 7:30 pm on Wednesday 24th November 2021 in Meyer Hall, The Village, Bebington, Wirral CH63 7PL (next to the Rose & Crown & opposite the Civic Centre). Light refreshments will be available.

All subscribing members are eligible to attend, and we look forward to being able to meet again and discuss the Wirral Barn Owl population.

Posted in WBOT Blog | Leave a comment
We use cookies on our website to give you the most relevant experience by remembering your preferences and repeat visits. By clicking “Accept All”, you consent to the use of ALL the cookies. However, you may visit "Cookie Settings" to provide a controlled consent.
Cookie SettingsAccept All
Manage consent

This website uses cookies to improve your experience while you navigate through the website. Out of these, the cookies that are categorized as necessary are stored on your browser as they are essential for the working of basic functionalities of the website. We also use third-party cookies that help us analyze and understand how you use this website. These cookies will be stored in your browser only with your consent. You also have the option to opt-out of these cookies. But opting out of some of these cookies may affect your browsing experience.
Necessary Always Enabled
Necessary cookies are absolutely essential for the website to function properly. These cookies ensure basic functionalities and security features of the website, anonymously.
Functional
Functional cookies help to perform certain functionalities like sharing the content of the website on social media platforms, collect feedbacks, and other third-party features.
Performance
Performance cookies are used to understand and analyze the key performance indexes of the website which helps in delivering a better user experience for the visitors.
Analytics
Analytical cookies are used to understand how visitors interact with the website. These cookies help provide information on metrics the number of visitors, bounce rate, traffic source, etc.
Advertisement
Advertisement cookies are used to provide visitors with relevant ads and marketing campaigns. These cookies track visitors across websites and collect information to provide customized ads.
Others
Other uncategorized cookies are those that are being analyzed and have not been classified into a category as yet.
Wirral Barn Owl Trust
SAVE & ACCEPT
Adopt-a-Box